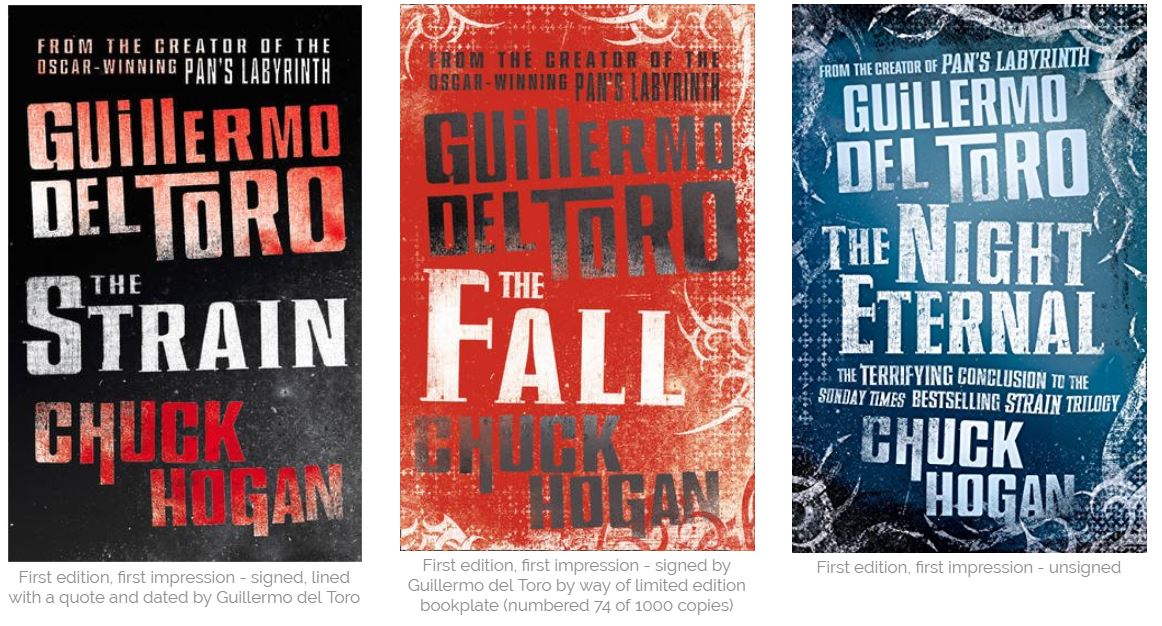 * NOTE - only 2 of this set are signed by del Toro

​A high-concept thriller with a supernatural edge from world-famous director, whose films include Pan's Labyrinth and Hellboy. A plane lands at JFK and mysteriously 'goes dark', stopping in the middle of the runway for no apparent reason, all lights off, all doors sealed. The pilots cannot be raised. When the hatch above the wing finally clicks open, it soon becomes clear that everyone on board is dead -- although there is no sign of any trauma or struggle. Ephraim Goodweather and his team from the Center for Disease Control must work quickly to establish the cause of this strange occurrence before panic spreads. The first thing they discover is that four of the victims are actually still alive. But that's the only good news. And when all two hundred corpses disappear from various morgues around the city on the same night, things very rapidly get worse. Soon Eph and a small band of helpers will find themselves battling to protect not only their own loved ones, but the whole city, against an ancient threat to humanity.

The tension-filled sequel to The Strain, from the world-famous director whose films include Pan’s Labyrinth and Hellboy. We survivors are bloodied, we are broken, we are defeated. But we are not turned. We are not Them. Not yet.
The virus unleashed on New York City has taken over. Amid the chaos, Dr Ephraim Goodweather leads a small team struggling against the bloodthirsty victims, but fears it may already be too late. Their condition is contagious, and is spreading across the country. Soon, the entire world will fall.

Though Eph understands the threat better than anyone, he is powerless to protect his son Zack. Now corrupted by the deadly strain, Zack's mother, Kelly, stalks the city, awaiting the chance to reclaim her flesh and blood.

Guided by Abraham Setrakian, the brilliant professor and Holocaust survivor, Eph and his team must fight off the great terror ahead. The ultimate plan in store for them and what remains of the human race is far more terrible than anyone can imagine - a fate even worse than total annihilation.

The nail-biting vampire thriller from the world-famous director of Pan’s Labyrinth and Hellboy.The night belongs to them, and it will be a night eternal…

After the blasts, it was all over. Nuclear Winter has settled upon the earth. Except for one hour of sunlight a day, the whole world is plunged into darkness. It is a near-perfect environment for vampires. They have won. It is their time.

Almost every single man, woman and child has been enslaved in vast camps across the globe. Like animals, they are farmed, harvested for the sick pleasure of the Master Race.

Almost, but not all. Somewhere out there, hiding for their lives, is a desperate network of free humans, continuing the seemingly hopeless resistance. Everyday people, with no other options – among them Dr Ephraim Goodweather, his son Zack, the veteran exterminator Vasily, and former gangbanger Gus.

To be free, they need a miracle, they need divine intervention. But Salvation can be a twisted game – one in which they may be played like pawns in a battle of Good and Evil. And at what cost…?