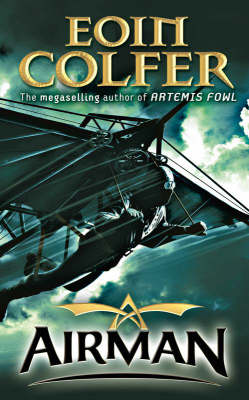 This copy is signed, lined with a quote and dated by the author to the title page. Also come with a mint promotional sampler.

Synopsis : One dark night on the island of Great Saltee, fourteen-year-old Conor is framed for a terrible crime he didn't commit. Thrown into prison by the dastardly Hugo Bonvilain, Conor is trapped in a sea swept dungeon and branded a traitor. He must escape and clear his name; he wants his old life back - his family, his friends...and his princess. Conor knows there is only one way out. It's an impossible task, which has never been done before. But Conor is determined to do it. He'll have to fly.

But Conor Broekhart was born to fly. Or, more accurately, he was born flying. Little wonder he became what he became. In an age of discovery and invention, many dreamed of flying, but for Conor flight was more than just a dream, it was his destiny. In one dark night on the island of Great Saltee, a cruel and cunning betrayal destroyed his life and stole his future. Now Conor must win the race for flight, to save his family and to right a terrible wrong...Swashbuckling new fiction from the amazing Eoin Colfer, ideal for readers aged 11+.