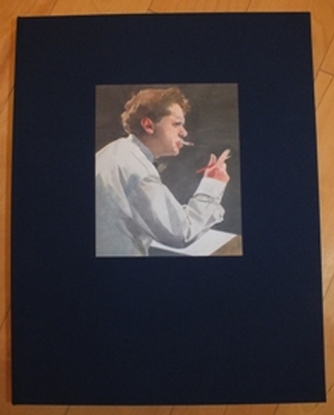 Front cover of solander (traycase)
Signed by the artist Peter Blake and accompanied by a signed print.

Synopsis : Published to mark the centenary of Dylan Thomas’s birth and to celebrate a body of work by Peter Blake.‘From where you are, you can hear their dreams’.

Internationally acclaimed for its eccentricity and lovelorn lyricism, Dylan Thomas’s 1954 ‘play for voices’ has long echoed in the imagination of the founding father of British Pop Art, Sir Peter Blake. An obsession that has spanned almost thirty years, this ‘greenleaved sermon on the innocence of men’ has filled the spaces of Blake’s studio, played and replayed on broadcast recordings, and has prompted numerous pilgrimages to Thomas’s creative refuge at Laugharne, Carmarthenshire.

All is ‘strangely simple and simply strange’ in the sleepy Welsh seaside town of Llareggub, as the dreams, fantasies and realities of its inhabitants unfold across the cycle of one spring day. At once a lively and humorous account of butchers, bakers, preachers and children, of Captain Cat, Nogood Boyo and Polly Garter – depicted with a ribaldry in which Blake delights – it is also a modern pastoral tale on a Chaucerian scale, a quest for purity in a ‘darkest-before-dawn’ world.

Revealed here for the first time alongside Thomas’s text, are the ‘dismays and rainbows’ of Blake’s richly detailed sequence of 110 watercolours, pencil portraits and collages, comprising one of his most distinctive and significant bodies of work ..

This Deluxe Edition consists of 100 clothbound copies, each accompanied by a signed original print by Peter Blake, bound byShepherds, Sangorski & Sutcliffe, housed in solanders made by Ludlow Bookbinders.