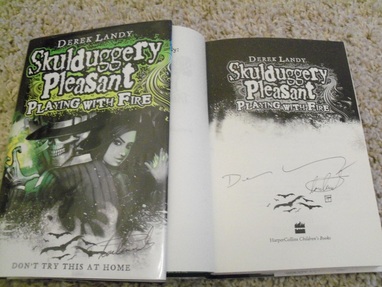 This copy is signed by both author and illustrator (VERY rare in itself) - book 2 of the Skulduggery Pleasant series.

Synopsis : Just when you think you've saved the world! "You will kill her?" the Torment asked. Skulduggery sagged. "Yes." He hesitated, then took his gun from his jacket. "I'm sorry, Valkyrie," he said softly. "Don't talk to me," Valkyrie said. "Just do what you have to do." Valkyrie parted her tunic, and Skulduggery pointed the gun at the vest beneath. "Please forgive me," Skulduggery said, then aimed the gun at the girl and pulled the trigger. With Serpine dead, the world is safe once more. At least, that's what Valkyrie and Skulduggery think, until the notorious Baron Vengeous makes a bloody escape from prison, and dead bodies and vampires start showing up all over Ireland. With Baron Vengeous after the deadly armour of Lord Vile, and pretty much everyone out to kill Valkyrie, the daring detective duo face their biggest challenge yet. But what if the greatest threat to Valkyrie is just a little closer to home!? Jacket review : Praise for Skulduggery Pleasant Hugely enjoyable -- a thrill-a-minute adventure.' Jonathan Stroud 'It's exciting, pacy, nicely handled and fun. I sincerely hope Landy revisits these characters.' Philip Ardagh, Guardian 'A gripping debut.' Phil Hogan, Observer 'Skulduggery Pleasant serves up a thoroughly satisfying blend of humour, magic and adventure. Once you've met Stephanie and Skullduggery, you'll be clamouring for a sequel.' Rick Riordan "A remarkably accomplished debut with wonderful dialogue." Robert Dunbar, Irish Times "[Landy's] fight scenes are perfectly pitched. His characters are exceptionally well drawn and delightfully colourful! Reading [this book] is like riding a rollercoaster." Irish Independent "Landy's witty style will win him fans of all ages! With writing of this standard, a rattling plot and definite potential for cross-over appeal, it's a good job Harry's [Potter] resigning before he's forcibly retired." Irish Mail on Sunday "Humour and magic combine in this thrilling adventure." Waterstone's Books Quarterly "!people in the book world are raving about this book." Glasgow Herald "It's pacy, it's funny, it's irreverent. The relationship between Skulduggery and Stephanie is tremendously strong. Stephanie is a splendid character -- blunt, logical and outspoken! We enjoyed Skkulduggery Pleasant. Muchly. Roll on volume two!" The Book Bag "A rip-roaring adventure." Irish Sunday Independent "Full of black humour, super powers, mysteries, murder and mayhem." Carousel "A debut that brings a much-needed twist to the mystery/fantasy genre with its wisecracking detective hero." New York Times "Readers will be skipping meals and sleep to get to the end." Kirkus Reviews "An utterly charming debut, perfect for the Potter crowd."