Deborah Harkness : A Discovery of Witches - signed and dated US hb 1st edn - SOLD OUT 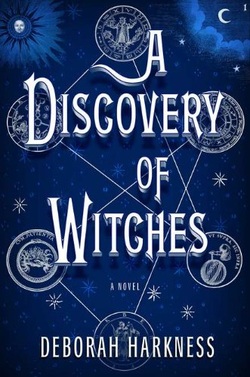 Synopsis : A richly inventive novel about a centuries-old vampire, a spellbound witch, and the mysterious manuscript that draws them together. Deep in the stacks of Oxford's Bodleian Library, young scholar Diana Bishop unwittingly calls up a bewitched alchemical manuscript in the course of her research. Descended from an old and distinguished line of witches, Diana wants nothing to do with sorcery; so after a furtive glance and a few notes, she banishes the book to the stacks. But her discovery sets a fantastical underworld stirring, and a horde of daemons, witches, and vampires soon descends upon the library. Diana has stumbled upon a coveted treasure lost for centuries-and she is the only creature who can break its spell. Debut novelist Deborah Harkness has crafted a mesmerizing and addictive read, equal parts history and magic, romance and suspense. Diana is a bold heroine who meets her equal in vampire geneticist Matthew Clairmont, and gradually warms up to him as their alliance deepens into an intimacy that violates age-old taboos. This smart, sophisticated story harks back to the novels of Anne Rice, but it is as contemporary and sensual as the Twilight series-with an extra serving of historical realism. From Publishers Weekly : In Harkness' lively debut, witches, vampires, and demons outnumber humans at Oxford's Bodleian Library, where witch and Yale historian Diana Bishop discovers an enchanted manuscript, attracting the attention of 1,500-year-old vampire Matthew Clairmont. The orphaned daughter of two powerful witches, Bishop prefers intellect, but relies on magic when her discovery of a palimpsest documenting the origin of supernatural species releases an assortment of undead who threaten, stalk, and harass her. Against all occult social propriety, Bishop turns for protection to tall, dark, bloodsucking man-about-town Clairmont. Their research raises questions of evolution and extinction among the living dead, and their romance awakens centuries-old enmities. Harkness imagines a crowded universe where normal and paranormal creatures observe a tenuous peace. "Magic is desire made real," Bishop says after both her desire and magical prowess exceed her expectations. Harkness brings this world to vibrant life and makes the most of the growing popularity of gothic adventure with an ending that keeps the Old Lodge door wide open. Signed by Author