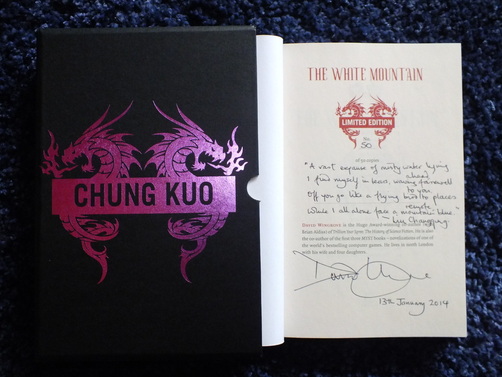 Also - signed lined and dated limited editions of earlier books in this series are still available.

Synopsis : A City Under Threat The year is 2207. Currents of unrest and tides of innovation threaten to overwhelm Chung Kuo's stability. And some threats are beyond the immense city's control. When a lethal epidemic strikes the Seven's chief supporters, Li Yuan acts ruthlessly to wipe out the disease. But his actions incur far more fatal consequences for the rule of the Seven. A Ruthless Response While the Seven splinters, Kwibesi, the detention camp for terrorists, continues to establish order. However, rebellion is brutally contained inside the camp and a growing sense of injustice stirs in its guard, Kao Chen, who begins to question his sense of duty. The Seven are divided amongst themselves, and around them allegiances are shifting.