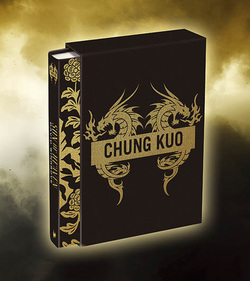 One of only ten copies of the limited first edition that has also been lined with a hand-written quote and dated by the author. I also have signed, lined and dated copies of the standard edition, and will be stocking SLD copies of all the subsequent volumes in this series.

A BRAND NEW prequel to Chung Kuo, a MASTERWORK of future history standing alongside Herbert's Dune end Asimov's Foundation. 'Imagine a collaboration between James Clavell and Frank Herbert and the result might be something very much like Chung Kuo...smart, involving, entertaining (San Francisco Chronicle).

Only 250 copies of this collector’s edition has been printed – each will be signed and hand-numbered, and presented in a black-cotton slipcase with gold foil series logo on front back and spine. It will also come with 4-colour endpapers with special extended version of the trade copy artwork by renowned fantasy artist Larry Rostant. Part Blade Runner, part Shogun, part Dune, part War and Peace  - a 100% Science Fiction masterwork - series rights sold in 14 territories, this is a monumental undertaking that will see all 20 titles produced over the next 5 years.........

The year is 2085, two decades after the great economic collapse that destroyed Western civilization. With its power broken and its cities ruined, life in the West continues in scattered communities. In rural Dorset Jake Reed lives with his 14-year-old son and memories of the great collapse. Back in ‘43, Jake was a rich, young futures broker, immersed in the datascape of the world‘s financial markets. He saw what was coming œ and who was behind it. Forewarned, he was one of the few to escape the fall. For 22 years he has lived in fear of the future, and finally it is coming œ quite literally across the plain towards him. Chinese airships are in the skies and a strange, glacial structure has begun to dominate the horizon. Jake finds himself forcibly incorporated into the ever-expanding ”World of Levels‘ a global city of some 34 billion souls, where social status is reflected by how far above the ground you live. Here, under the rule of the mighty Tsao Ch‘un, a resurgent China is seeking to abolish the past and bring about world peace through rigidly enforced order. But a civil war looms, and Jake will find himself at the heart of the struggle for the future.

In this future life will revolve around a rigidly hierarchical society where success and prestige is measured by how far above the ground one lives. Some – in the Above – live in ornate comfort, basing their lives on the customs of imperial China. Others – in the Lowers – live in crowded squalor, and beneath them – Below the Net – lie the basement levels where the luckless and the criminal have been cast down and left to rot. Yet worse still, beneath the City lie the ruins of old Earth, ‘the Clay’, built over by the Han – a lightless, stygian hell in which, astonishingly, humans still exist.

Skirting the cities are vast plantations manned with indentured labourers, huge pens of genetically engineered, grub-like meat animals – while in Earth’s few remaining mountain fastnesses dissidents and rebels build their fortresses... Far above all this, in geostationary orbit, float the palaces of the Seven – the planet’s hereditary rulers. Beyond their exquisite finery lie the commercial research bases of Mars, and in deep space, the industrial outer colonies, and, perhaps, mankind’s destiny...Spanning nearly 200 years, CHUNG KUO is a monumental history of the future told through the eyes of a cast of hundreds, drawn from all levels of society: triad bosses and assassins, emperors and artists, courtesans and soldiers, scientists and thieves, terrorists and princes. At the very heart of their stories lies the ‘War of Two Directions’ – a struggle for the destiny of mankind. For the Seven the goal is stability and security – at the expense of individual freedoms if necessary – while a commercially-orientated faction desires change and the uncharted challenge of the new – even though loosening constraints on a overpopulated planet could be lethal. Political tensions between the two factions will lead to assassination, biological and nano-technological terrorism, and ultimately to war. The War of Two Directions is much more than the simple clash of East and West. The world will have to choose between Change or Stasis. The safety of the Past or the uncertainty of the Future? Inwardness or Outwardness? Darkness or Light? Connection or Separation? These choices, like the perpetual yin and yang of the Tao itself, form the mighty threads from which the epic tapestry of CHUNG KUO has been woven.

Chung Kuo means ‘Middle Kingdom’, and since 221 bc, when the first emperor Ch’in Shih Huang Ti, unified the seven Warring States, it is what the Han, or Chinese, have called their great country. For them Chung Kuo was the whole world; a world bounded by insurmountable mountain chains to the north and west, by the sea to east and south. Beyond lay only desert and barbarism. And so it was for two thousand years, through sixteen great dynasties.

But then, from the far west came young, aggressive nations with superior weaponry and an unshakable belief in progress and change. It was, to the surprise of the Han, an unequal contest and China’s myth of supreme strength and self-sufficiency was shattered. By the early twentieth century, China was the sick old man of the East, the future, it was assumed, belonged to the West. But from the disastrous ravages of the century grew a giant of a nation, capable of competing with the West from a position of incomparable strength. The twenty-first century, ‘the Pacific Century’ as it was known even before it began, saw China become once more a world unto itself, but this time its only boundary was space. This is the story of what happens next...

I will be sourcing signed, lined and dated copies of each of the books in this series - if you are interested in securing them as they are released, please let me know. The second limited edition will be available in October and the rest of the programme runs like this:

For all titles after Daylight the HB and PB release will be simultaneous. The limited edition will be released one month before the HB/PB date above.

'One of the masterpieces of the decade'- Washington Post

'Quite extraordinary...finally delivers SF into the hands of an English Proust'- Brian Aldiss

'Excellent...with a well-imagined universe, well-executed characters and action that doesn't let up, this is Orwell's 1984 but on an enormous canvas packed with detail'- Toronto Globe and Mail 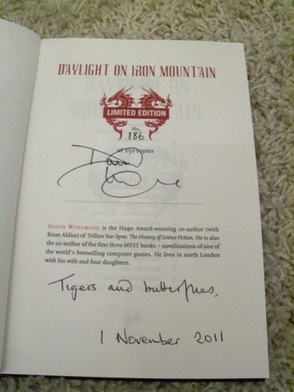 Deluxe first edition of "Daylight on Iron Mountain" - also signed, lined and dated by the author.