Daniel Handler : We Are Pirates signed US HB First Edition 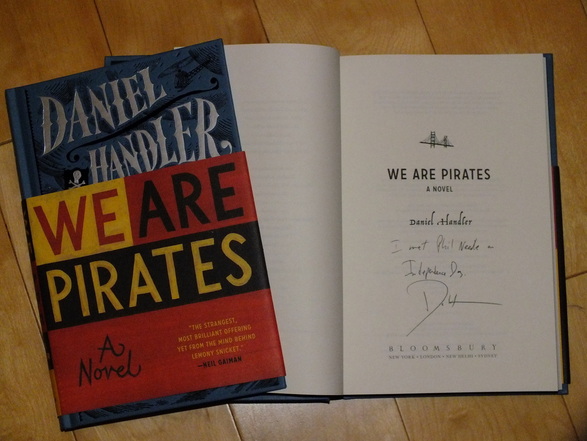 Synopsis : A boat has gone missing. Goods have been stolen. There is blood in the water. It is the twenty-first century and a crew of pirates is terrorizing the San Francisco Bay.

Phil is a husband, a father, a struggling radio producer, and the owner of a large condo with a view of the water. But he'd like to be a rebel and a fortune hunter.

Gwen is his daughter. She's fourteen. She's a student, a swimmer, and a best friend. But she'd like to be an adventurer and an outlaw.

Phil teams up with his young, attractive assistant. They head for the open road, attending a conference to seal a deal.

Gwen teams up with a new, fierce friend and some restless souls. They head for the open sea, stealing a boat to hunt for treasure.

We Are Pirates is a novel about our desperate searches for happiness and freedom, about our wild journeys beyond the boundaries of our ordinary lives.

Also, it's about a teenage girl who pulls together a ragtag crew to commit mayhem in the San Francisco Bay, while her hapless father tries to get her home.

"We Are Pirates will dazzle, disturb, and delight you. It might even do things to you that don't start with the letter D, like remind you what it's like to be young, or convince you that Daniel Handler can do anything." —Jess Walter, #1 New York Times bestselling author of Beautiful Ruins

"Honest and funny, dark and painful, We Are Pirates reads like the result of a nightmarish mating experiment between Joseph Heller and Captain Jack Sparrow. It's the strangest, most brilliant offering yet from the mind behind Lemony Snicket." —Neil Gaiman

"I loved it! We Are Pirates is extraordinary! It takes brand new shapes. And that prose is ruthless. Merciless. And then, the next second, it made me laugh out loud. Remarkable story, remarkable characters, remarkable prose. I'll carry that in my head forever." —Russell T. Davies

"There is no writer quite like Daniel Handler. Somehow he manages to work at the intersection of irony and wonderment, whimsy and menace—a space I'm not sure I knew existed until I read his work." —Jennifer Egan, author of A Visit from the Goon Squad

"Daniel Handler turns whimsy into wisdom and the fantastic into the great. He is, of course, a genius." —Lorrie Moore, author of A Gate at the Stairs and Bark

"Handler (aka children’s author Lemony Snicket) has never been known for writing precisely happy novels, and his latest certainly doesn’t deviate. What could easily have been a slightly silly, fantastical romp becomes, instead, in Handler’s capable hands, a macabre, darkly human portrayal of family dynamics and growing up in a world running low on adventure . . . peppered with black humor." —Booklist, starred review

"Handler is a master at depicting the existential chaos all his major characters are living through, and with warmth, sympathy and considerable humor at that. The reader will delight in Gwen and old Errol's escapades . . . Affecting, lively and expertly told. Just the sort of thing to make grown-ups and teenagers alike want to unfurl the black flag." —Kirkus Reviews

"Can a couple of teenagers, a befuddled old man, and a nursing home orderly really steal a boat and wreak havoc in San Francisco harbor? Sure, says Handler, crossing and mixing genres—dark and light, YA yarn and midlife doldrum—while making readers root for his 20th-century privateers . . . A jaunty and occasionally jolting, and honest take on the discomforts of youth, midlife, and old age, and how ineffective we are at dealing with them."  —Publishers Weekly

"Daniel Handler [is] something like an American Nabokov." —Dave Eggers

"If it's possible to be criminally underrated yet also be a millions-selling author, then Handler is it." —The Huffington Post

"Dark and hilarious . . . arresting. Daniel Handler . . . is a master of quiet suspense. What drives We Are Pirates is a current of love and Handler’s strangely beautiful ability to show how even in a chaotic world, our lives have a way of converging if only we stop to notice." —Elle

"One of our most dazzling literary conjurers shuffles the deck of contemporary consciousness and desire. A thrilling feat of tragic magic." —Michael Chabon on Adverbs

"Gymnastic prose . . . brilliantly turned reminders that there are a million ways to describe love and none of them will be the last word." —The New York Times Book Review on Adverbs

"Adverbs works brilliantly and poignantly, taking its ruminations on the complexity and fallibility of love to avian heights." —Washington Post Book World on Adverbs

"Witty and achingly true-to-life." —Vanity Fair on Why We Broke Up

"It's . . . difficult to take such an everyday tragedy with a predictable ending and elevate it to an end point of enduring, emotionally effective art." —Los Angeles Times on Why We Broke Up

"A monsterpiece of creativity, but underneath its roar and bluster beats a surprisingly gentle heart . . . . Genuinely clever [Handler is] a virtuosic and original writer." —San Francisco Chronicle on Watch Your Mouth
About the Author
Daniel Handler is the author of the novels The Basic Eight, Watch Your Mouth, Adverbs, and Why We Broke Up. As Lemony Snicket, he is responsible for many books for children, including the thirteen-volume sequence A Series of Unfortunate Events and the four-book series All The Wrong Questions. He is married to the illustrator Lisa Brown, and lives with her and their son in San Francisco. 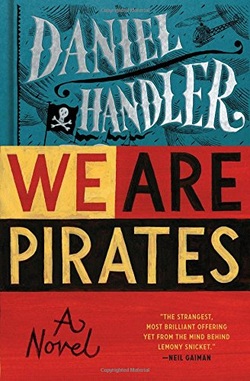 Daniel Handler : We Are Pirates signed US HB First Edition
£
42.99