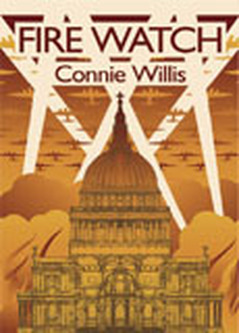 WSFA Press, US, 2010. Hardcover. Book Condition: New. Dust Jacket Condition: New. Jouh Coulthart (illustrator). Limited Edition. "Fire Watch", by Connie Willis ¿ signed, limited (to 500 copies) edition ¿ full cloth in dust jacket. Issued as a double-signed, subsequently signed by the cover artist Andy Coulthart. If you have the Sub Press limited editions of "Blackout" and "All Clear", and you have either number 321, 322, 323, 330 or 340 then you may be able to match one of these to your set - PLEASE CONFIRM AVAILABILITY BEFORE PURCHASE. This year WSFA Press published a special 500-copy limited and signed hardcover edition of Fire Watch, Connie Willis¿ 1982 Nebula, and 1983 Hugo award winning novelette relating the experiences of a time-travelling historian who goes back to The Blitz in London, to participate in the fire watch at St. Paul¿s Cathedral. It is the story which inspired Willis¿ highly acclaimed "Blackout" and "All Clear", and the story to which, Connie says, she owes her career. Fire Watch was released at this year¿s Capclave Science Fiction convention in the US, was initially only available to members of the convention, and with only one copy of each book per member. The few remaining copies have been offered for sale to the general public, and is all-but sold-out at this time. This volume of Fire Watch was designed by John Coulthart, a well-known British graphic artist, illustrator, author and designer. It begins with a foreword by James Patrick Kelly and was initially signed by Willis and Kelly. I have subsequently had these copies signed by Coulthard, and so they are the only copies in the 500-copy print run that have been signed by all 3 parties.

NOTE - I have SLD first edition copies of "Blackout" and "All Clear" available - please check out my other titles.