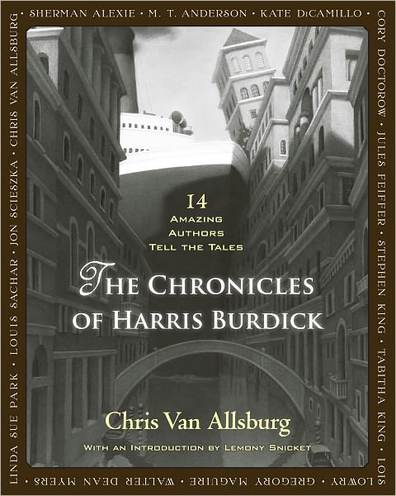 US hardback first edition, first impression - signed and dated by the author to the tilte page.

Synopsis : An inspired collection of short stories by an all-star cast of best-selling storytellers based on the thought-provoking illustrations in Chris Van Allsburg’s The Mysteries of Harris Burdick.

For more than twenty-five years, the illustrations in the extraordinary Mysteries of Harris Burdick by Chris Van Allsburg have intrigued and entertained readers of all ages. Thousands of children have been inspired to weave their own stories to go with these enigmatic pictures. Now we’ve asked some of our very best storytellers to spin the tales. Enter The Chronicles of Harris Burdick to gather this incredible compendium of stories: mysterious, funny, creepy, poignant, these are tales you won’t soon forget.

Van Allsburg's The Mysteries of Harris Burdick, published in 1984, paired foreboding sentences with cryptic, highly detailed charcoal-pencil illustrations. With mostly stimulating, sometimes conventional results, seasoned authors (and Van Allsburg himself) play the game children have for decades, incorporating the sentences and visual cues into new stories (and one old one, Stephen King's "The House on Maple Street") that expand on the original's enigmas. The liveliest entries pick up on Van Allsburg's haunting ambiguity: Jon Scieszka ends with a cliffhanger, Gregory Maguire weaves a complex tale of magic, and M.T. Anderson concocts a chilling Halloween offering. For a lakeside picture of two children, Sherman Alexie writes a sinister narrative about exasperating twins who pretend to have a third sibling, until their creepy prank backfires. In quieter examples, Walter Dean Myers describes an dying man's library and a girl's love of books, while Kate DiCamillo finds a wartime story of longing in an image of wallpaper missing one bird ("It all began when someone left the window open"). This star-studded exercise in creative writing tests the wits of favorite authors and shows readers how even the big shots hone their craft

Van Allsburg's Harris Burdick illustrations have evoked such wonderment and imagination since Harris Burdick's original publication in 1984; many have speculated or have woven their own stories to go with his images. More than ever, the illustrations send off their eerie call for text and continue to compel and pick at the reader's brain for a backstory—a threaded tale behind the image. In this book, we've collected some of the best storytellers to spin them.