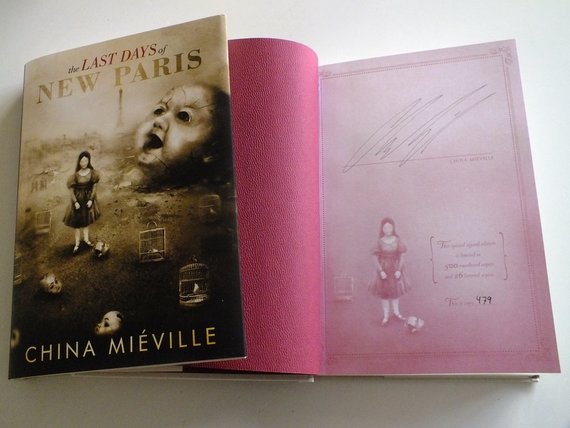 Signed and numbered by the Author. Signed and remarqued by the artist Vincent Chong.

About the Book: “In Paris you had to be ready to fight art and the Hellish—not to mention Nazis…”
​
Multiple-award-winning China Mieville’s extraordinary novel The Last Days of New Paris is a door into the heart of a twentieth century that never was, that always was. The hinges it turns on are surrealism and anti-Fascism and occultism, oiled by vivid prose that startlingly mines art and poetry for its images. The story it opens to reveal combines mystery and adventure, philosophy and revolution.

Here is the American Jack Parsons in 1941 Marseilles, navigating a tangle of competing wartime powers incapable of containing the chaos of wartime Europe. A student of the occult, he encounters fleeing surrealist thinkers, and something extraordinary is born in the cauldron of his imagination.

Here is the resistance fighter Thibaut in 1950 Paris, struggling to survive and fight on in a city haunted by manifs, manifestations from the dreams and nightmares of the century’s most fertile imaginations. These manifs are in conflict with hellspawn called up by Nazi officer-priests.

By turns heartbreaking and breathtaking, this book conjures a world that demands attention, and tests loyalties to concepts as fundamental as reality itself. Here is a tour de force of imagination, here is a crescendo of thought, here, at last, is the exquisite corpse. Here is The Last Days of New Paris, an unmissable new novel by a modern master of the fantasic.
​
Limited: 500 signed numbered hardcover copies

From Publishers Weekly: “Miéville (This Census-Taker) takes on the surrealists in this gritty and erudite fantasy. In 1941, a surrealist bomb exploded in Nazi-occupied Paris, unleashing thousands of manifs—physical manifestations of images taken from surrealist paintings. Some were merely whimsical; others were terrifying and dangerous. Now it’s 1950 and New Paris, as it’s called, is the epicenter of the continuing war. The chaotic city is fought over by Nazis and Parisians, both sides constantly bedeviled by the chaotic manifs. Worse still, the Nazis have made contact with hell and unleashed demons to aid their villainy…”

From Booklist: “Inventive and engrossing, this novel shows why Mieville remains one of the best recent writers not only of weird fiction but of speculative fiction in general.”

From the Chicago Tribune: “[The Last Days of New Paris] is a novel both unhinged and utterly compelling, a kind of guerilla warfare waged by art itself, combining both meticulous historical research and Mieville's unparalleled inventiveness.”