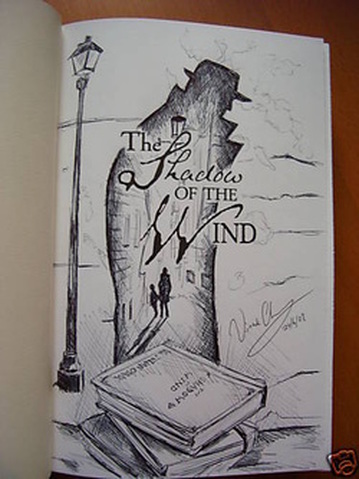 Limited to just 1,000 copies, this edition has been signed by the author, and signed/remaqrued by the multi-award-winning cover artist Vincent Chong

“If you thought the true gothic novel died with the 19th century, this will change your mind. Shadow is the real deal, a novel full of cheesy splendor and creaking trapdoors, a novel where even the subplots have subplots. There's a haunted house (ah, but by what?) called the Angel of Mist, and the only horror greater than the thing rotting in its bricked-up crypt is (but of course, senor) the horror of doomed love.“There's a great deal of love in Shadow, doomed and otherwise. Much of it is lavished upon a romantic dream of Barcelona as it might have been in the mid-20th century (in Zafon's hands, every scene seems to come from an early Orson Welles movie); even more is reserved for books. Shadow's narrator is a sweet kid named Daniel Sempere, whose mother has died and who is horrified to realize he can no longer clearly remember her face. When he tells his father this, the elder Sempere takes him to what is surely one of the more delightful locales in modern fiction: the Cemetery of Forgotten Books. There, he's told, a visitor may adopt one book which he will care for ever after, making sure it is never lost. Daniel chooses The Shadow of the Wind, by a forgotten writer (the Dow Mossman of his day, one might suppose) named Julian Carax, only to discover that a terrifying man—if he is a man—has made it his life's work to burn every Carax novel in existence. The story that follows includes murders, false identities, and two supremely satisfying love affairs. Be warned, you have to be a romantic at heart to appreciate this stuff, but if you are, this is one gorgeous read.” —Stephen King

The Shadow of the Wind has become an international phenomenon, a best-seller in dozens of countries. This deluxe limited edition features a fine paper (80# Finch), deluxe cloth, a sewn binding, and is printed in two colors throughout. We consider The Shadow of the Wind one of the most important books of the past twenty years, and this limited edition is the lavish edition it so richly deserves..