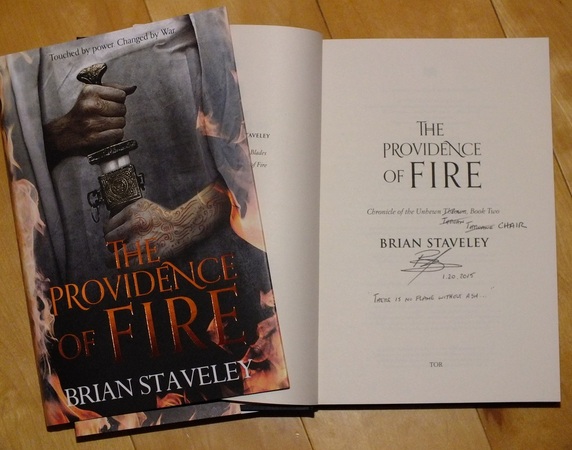 Signed, lined and dated UK HB first edition. The author has also had a little fun with a small number of these, "correcting" the misspelt subtitle on the half-title page. Only available whilst stocks last.

﻿Synopsis :  War is coming, secrets multiply and betrayal waits in the wings...

The Annurian Empire's ruling family must be vigilant, as the conspiracy against them deepens. Having discovered her father's assassin, Adare flees the Dawn Palace in search of allies. But few trust her, until she seems marked by the people's goddess in an ordeal of flame.

As Adare struggles to unite Annur, unrest breeds rival armies - then barbarian hordes threaten to invade. And unknown to Adare, her brother Valyn has fallen in with forces mustering at the empire's borders. The terrible choices they face could make war between them inevitable.

Fighting his own battles is their brother Kaden, rightful heir to the Unhewn Throne, who has infiltrated the Annurian capital with two strange companions. While imperial forces prepare to defend a far-distant front, Kaden's actions could save the empire, or destroy it.

Book One, The Emperor's Blades, was on the list of BuzzFeed.com's most-anticipated SF/F reads for 2014 and also on the Fantasy Faction blog for most anticipated fantasy for 2014.