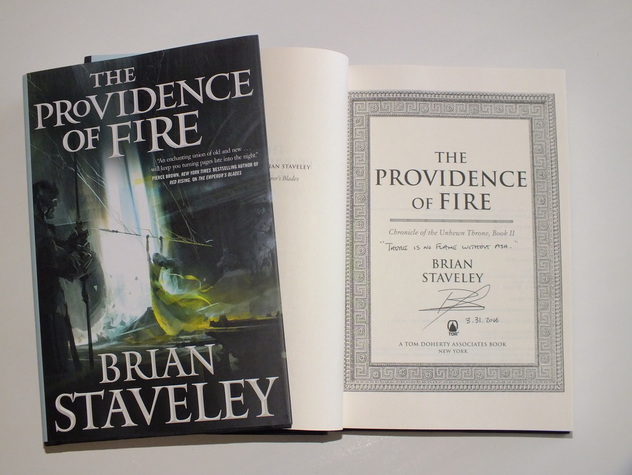 Synopsis : Brian Staveley's The Providence of Fire, the second novel in the Chronicle of the Unhewn Throne, a gripping new epic fantasy series.

The conspiracy to destroy the ruling family of the Annurian Empire is far from over.

Having learned the identity of her father's assassin, Adare flees the Dawn Palace in search of allies to challenge the coup against her family. Few trust her, but when she is believed to be touched by Intarra, patron goddess of the empire, the people rally to help her retake the capital city. As armies prepare to clash, the threat of invasion from barbarian hordes compels the rival forces to unite against their common enemy.

Unknown to Adare, her brother Valyn, renegade member of the empire's most elite fighting force, has allied with the invading nomads. The terrible choices each of them has made may make war between them inevitable.

Between Valyn and Adare is their brother Kaden, rightful heir to the Unhewn Throne, who has infiltrated the Annurian capital with the help of two strange companions. The knowledge they possess of the secret history that shapes these events could save Annur or destroy it.​