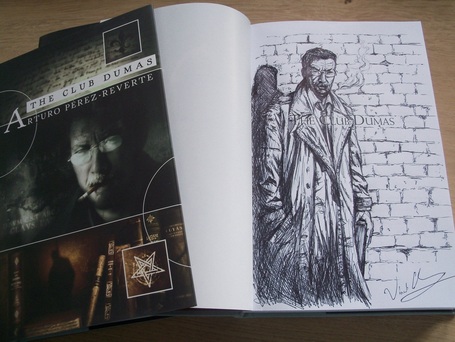 This limited numbered edition (one of just 500) has been signed by the author, and remarqued with a full-page sketch, and signed by Vincent Chong.

Synopsis : Since its initial publication in 1993, Arturo Perez-Reverte’s The Club Dumas has been widely recognized as one of the most intricate, rewarding “literary” mysteries of the modern era. It is one of those all too rare novels that imprints itself on the reader’s memory, that offers new pleasures and new discoveries with each successive reading.

The Club Dumas is a multi-layered quest story featuring “mercenary” book hunter Lucas Corso, who is hired to authenticate a pair of literary curiosities: a hand-written fragment of Alexander Dumas’s masterpiece, The Three Musketeers and a rare edition of a proscribed volume of black magic entitled The Book of the Nine Doors of the Kingdom of Shadows. These interlinked quests lead Corso into a labyrinth of murder, suicide, and satanic rituals. At the same time, they lead him into the heart of a carefully constructed narrative that is strange, familiar, and deeply seductive, all at once.

Using elements from John Milton, Umberto Eco, Arthur Conan Doyle, Agatha Christie and, of course, Alexander Dumas, this enthralling novel is an intellectual thriller of the highest order. More importantly, it is a profoundly erudite meditation on the importance of books, and on the power they continue to exert on us across the centuries.

The Club Dumas will be produced to the highest standards, printed in two colors on 80# Finch, bound in a fine cloth, with a projected full-color cover, five full-color interior plates, and sixteen duotone images by Vincent Chong 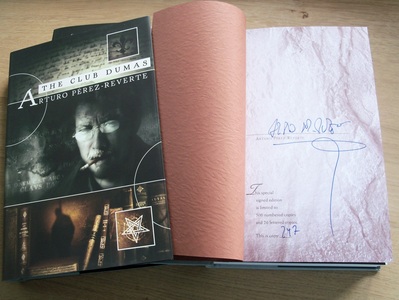