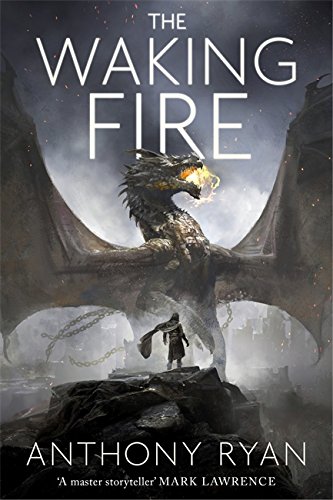 Synopsis : The new star of British fantasy returns with The Waking Fire, a thrilling new tale of exploration and adventure, spies and assassins, explosive magic and the battle for empire. The Ironship Protectorate is the most powerful nation in the world, unrivalled in military might and technological prowess. For decades the Protectorate has distilled the blood of wild drakes, creating elixirs that grant fearsome powers to a select few individuals. These men and women - the 'blood blessed' - act as the Protectorate's agents, spies and assassins. Yet now a crisis looms: the drake bloodlines are weakening. Worse, the Corvantine Empire is preparing an invasion. The Protectorate's only hope of survival lies with the myth of a legendary drake, rumoured to be the most powerful of its kind. Clayton Torcreek - small-time criminal and unregistered blood blessed - cares little for matters of empire. Yet when his latest heist goes badly, the Protectorate charges him with venturing into uncharted wilds in search of this elusive beast. Like it or not, his nation's future lies in his hands. Meanwhile, the Protectorate's most distinguished spy, Lizanne Lethridge, must go deep undercover in enemy territory. Her mission: locate and steal an ancient relic that might just turn the tide of the war - but only if she can find it first.