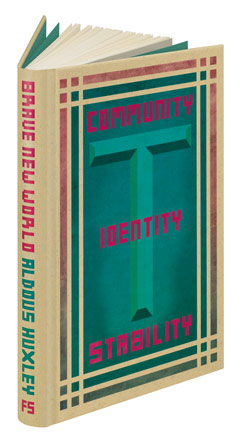 Signed by the artist Finn Dean.

Synopsis : First published in 1932, Aldous Huxley’s depiction of a totalitarian dystopia ranked fifth on the Modern Library’s list of the 100 best English-language novels of the 20th century. It is the prototype for many of the motifs and ideas that recur in our imagined and speculated futures, in fiction and in film. The questions it raises around industrial manufacturing, the purposes of science and the integrity of the individual, remain unnervingly prescient.

Set in London in 632 A. F. (‘After Ford’), it describes a new ‘World State’ in which human clones, conditioned through hypnopaedia to perpetually inhabit ‘an invisible bottle of infantile and embryonic fixations’, support a meticulously controlled system of consumption and production. A rigid caste system is blithely accepted by all, from Epsilon Semi-Moron factory workers to scientists at the Hatchery and Conditioning Centre. Desires are immediately fulfilled: ‘You can’t have a lasting civilisation without plenty of pleasant vices,’ says one of the ten local World Controllers, Mustapha Mond. There are no familial ties, and promiscuity is obligatory. Unpleasant feelings are swiftly aborted by a voluntary hit of soma, a wonder drug that provides a ‘holiday’ from consciousness, sustaining the contented inertia that preserves world stability. Only occasionally does the process fail, as with Bernard Marx, a miserably insecure ‘Alpha-Plus’ who lacks the physical stature that should accompany his high IQ. Returning from a tourist trip to a Mexican Reservation – one of the resource-poor areas of the Earth deemed unworthy of ‘civilisation’ – and anxious to raise his image, he introduces a Shakespeare-quoting ‘savage’, John, to the ‘Brave New World’. Though initially intrigued,John is soon horrified by the synthesised, godless happiness of his ‘civilised’ counterparts. His retreat from and subsequent clash with the world he has rejected bring to a hideous conclusion the conflict between perpetual happiness and free will.

Ursula K. Le Guin’s acclaimed body of work includes 21 novels, 11 volumes of short stories and 12 books for children. Her novel The Left Hand of Darknesswon both the Hugo and Nebula Awards. In her introduction, she writes that: ‘Huxley was brilliant in his paradoxical depiction of a perfect heaven which is a perfect hell.’ This Folio edition was the subject of the 2013 Book Illustration Competition, run in association with the House of Illustration. The winner, Finn Dean, was chosen for his striking style, which has a futuristic feel reminiscent of Art Deco patterns and shapes. Also included is the author’s own 1946 preface – a source of insight into his evolving stance on the world he created. 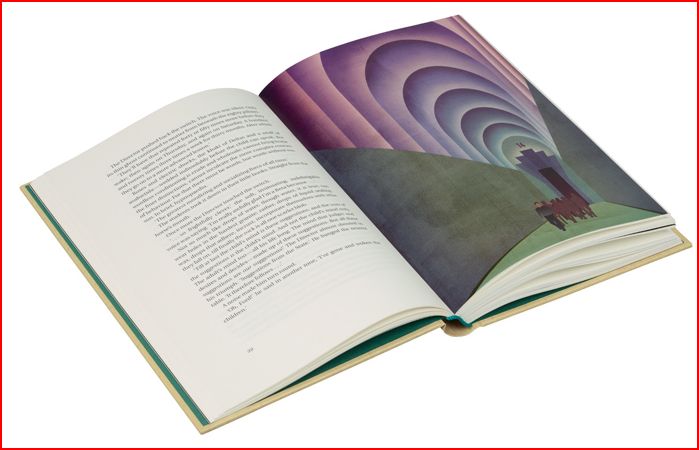